The main cast premiered the show on May 31, but two performances and two school matinees are given by this completely separate line-up, with its own actors, director and conductor. The focus is artist development, and it’s an impressive program, now in its second decade. Among Holland Park’s main productions this year, 17 artists are program alumni.

The production has already received rave reviews, which I am happy to amplify. The set, designed by a “takis”, is very simple: two inclined walls which can be moved into different positions around the back of the stage. High doors open in the panels, transforming them into series of pillars, and the interior of a palace becomes a colonnaded garden. A few rushes in the background suggest a rural setting. It is more or less that. Everything else is achieved through lighting effects (designer Robert Price), which are used to impressive psychological effect, drawing the audience into Onegin’s mind as events conspire against him.

The show is directed by Julia Burbach, but the Young Artists version by Emma Black. Presumably the overall concept came from Burbach, but the details of the Regulated person are in Black. If so, equal credit is earned. The minimal stage concept means drama is especially dependent on compelling and dramatic performances, and for the most part, that’s exactly what we get.

Younger singers always make for a more believable cast, at least for romantic lead roles. Like Tatyana and Onegin, Lucy Anderson (left picture) and Rory Musgrave are incredibly believable. Anderson has a complex, vibrato-rich sound. It’s more satisfying in the midrange than in the high end, but the part doesn’t require much top end. Musgrave completes its sound with an equally sophisticated and polished tone. A lack of power is all that separates these singers from their older colleagues; their tone and artistry are already assured.

Clever voice casting connects Tatyana with Onegin, and Olga with Lensky. Unlike the main couple, the Olga and Lensky of Anna Elizabeth Cooper and Jack Roberts (shown below) both have a clear and direct vocal style. Cooper particularly stands out, even among this fine cast, for his vocal agility and supple, clear phrasing. Jack Roberts has an old-school matinee idol tenor, or he puts one on for Lensky. This proves ideal for projecting the character’s stubbornness and jealousy. 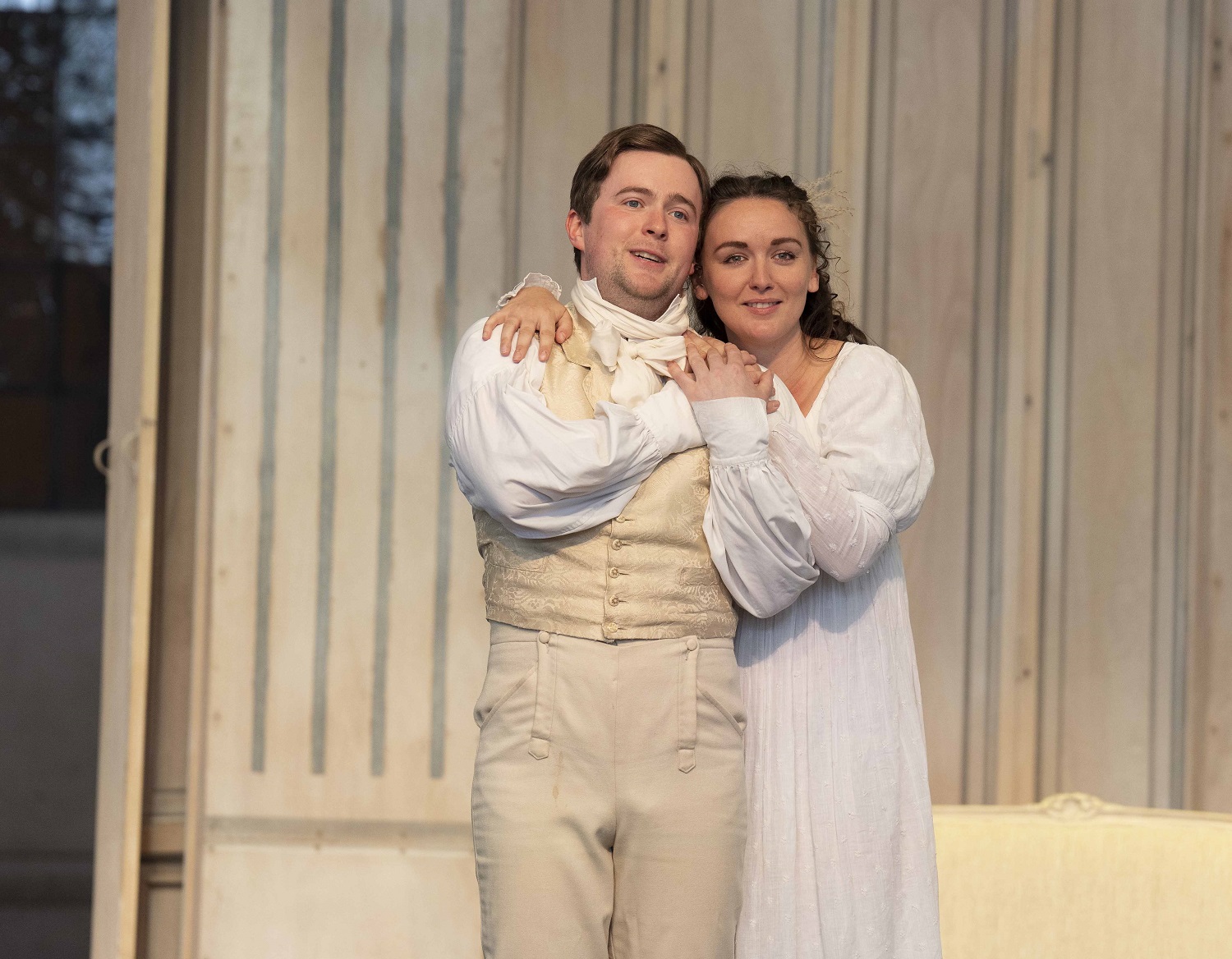 The Holland Park stage has a lowered walkway around the front of the pit, which the production uses effectively. The sets of the first act risk becoming overcrowded, which the directors avoid by placing several characters in the foreground. But it’s never just the tracks that sing from here. The tablet the roles remain in the background, the only backdrop to the psychological drama. Despite everything, they are all well cast. More imagination is needed to incorporate young singers into these older roles, especially Emily Hodkinson’s Larina and Jane Monari’s Filippyevna (both pictured below). But, beyond the subtle costumes, the production does not excuse the youth of the singers, and vocally all are impressive. Russian pronunciation is a particular strength of this cast, especially in supporting roles. This speaks of careful preparation on the part of all the singers.

The directors take some dramatic liberties to convey the psychological drama, mostly involving mute characters appearing as apparitions. In the letter scene, Onegin appears and Tatyana addresses him directly as she writes. In the introduction to the duel scene, Lensky appears to Onegin as a kindred spirit, before leaving and returning as an enemy. Lensky’s ghost also haunts Onegin at the Gremin Palace ball. It works well, though the idea is taken too far when the whole Polonaise turns into a nightmarish sequence, with Onegin imagining himself gunning down the entire cast. As Gremin, Henry Grant Kerswell has a suitably world-weary tone (despite his youth). Little effort is made to distinguish Gremin’s palace from previous sets, beyond the smarter costumes, and the production does little with the final scenes, or with Gremin himself. 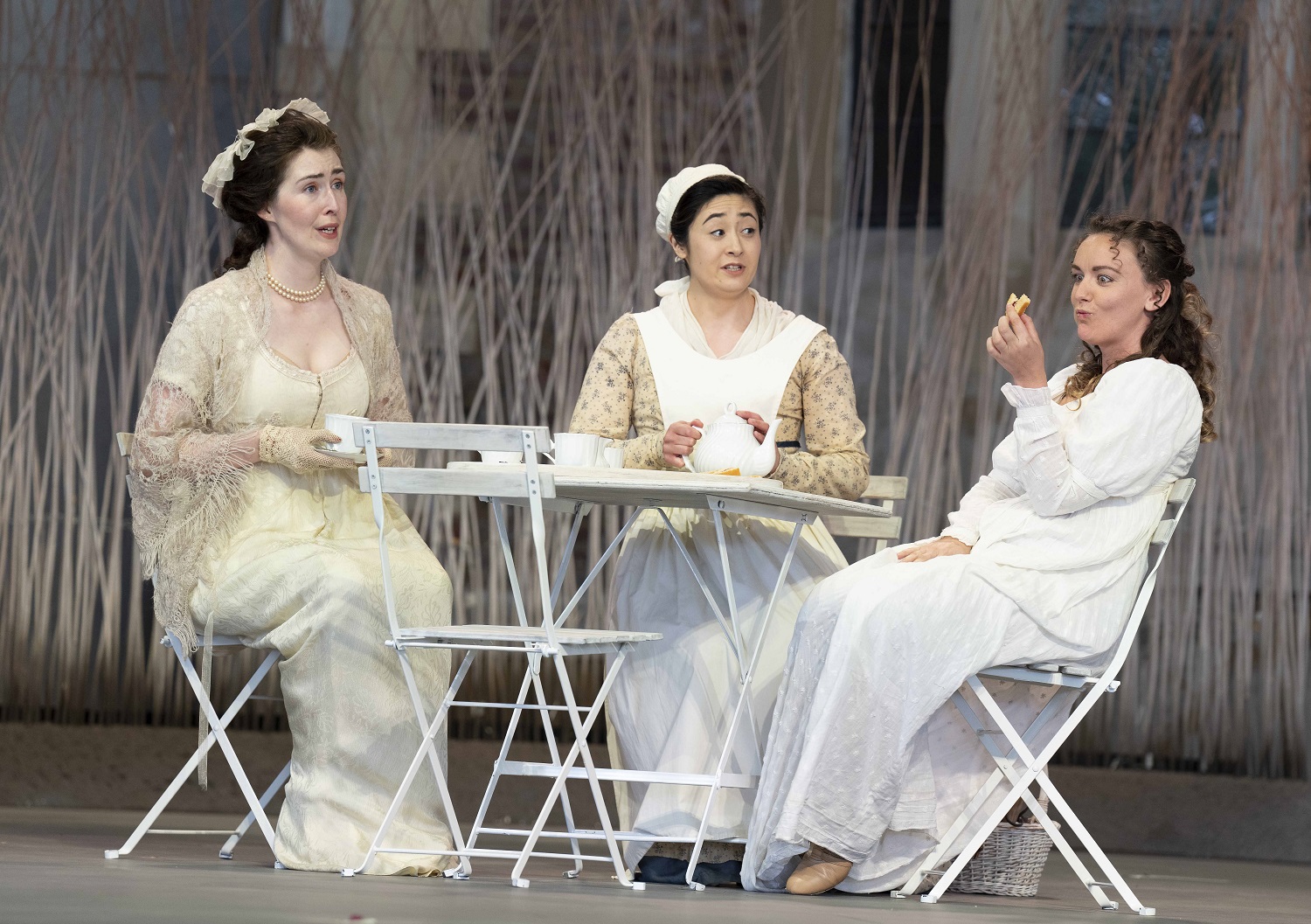 Musically, this performance got off to a shaky start: the capricious tuning of the strings and the foursquare phrasing bode ill. Fortunately, the standards quickly rose with the entry of singers. The City of London Sinfonia appears here as a small pit orchestra, often having to overwork itself to sound like a big one, and the sound of the strings often suffers as a result. Some fine wind solos though, and an impressive performance from Tchaikovsky’s beloved bassoons. Rebecca Knight’s cello solo deserves special mention, her solos bringing real intimacy and warmth. Conductor Hannah von Wiehler lacks imagination with orchestral textures, but her guidance and management of singers is impressive. She is also particularly good at punctuating dramatic climaxes. And the letter scene was just beautiful, a triumph for her and Lucy Anderson. Like the orchestra, the Holland Park Chorus is small but punches above its weight.

Like any Russian opera, Onegin is usually associated with big, mature vocals and deep, rich musical textures. The Young Artists version in Holland Park presents it differently, with more intimacy and more reflection. It’s an impressive showcase for emerging talent, so watch out for all the above names at Holland Park, and further overseas, in the years to come.