Served together this way, Delius’s Margot La Rouge and that of Puccini The Villa offer a kind of small tasting menu of the late 19th century opera scene (although the Delius dates from a little after the end of century). Opera veterans can laugh a little at the old-school recipes presented. But many newcomers should ask for more.

Both short works owe their composition to the competition for new one-act operas organized by the Milanese publisher Sonzogno for two decades from the early 1880s. Neither won: no The Villa in 1883 (the young Puccini later revised it), nor Margot La Rouge in 1903 (the score, which accompanied a French libretto, then languished for 80 years, although Delius later recovered some of the music for his Prelude and Idyll). And both pieces play strongly against type. In MargotBucolic visionary Delius delivers a bloody slice of hard-core verism like an artist and a soldier fight over a Parisian prostitute on a dark and stormy night (yes!). In The Villa, Puccini, later the inescapable of the harrowing low life on the banks of the Seine, becomes all Germanic and Gothic. A wandering villager in search of fortune abandons his virginal sweetheart for a big-city mermaid, only to face retaliation from a fearsome squad of forest spirits (shown below).. A real Black Forest cake, in other words. Women with few options, abandoned and betrayed, fuel both plots. Director Martin Lloyd-Evans cleverly splices the sensational embrace of sons, with touches of direction that hint at the bonds between these unlikely bedfellows. Lloyd-Evans and designer takis roll out the wide open spaces of the Holland Park stage as it wraps around the prominent orchestra pit – occupied, as usual in this venue, by the City of London Sinfonia . Behind the fanfare, always savory and idiomatic, a rotating box provides the decor for domestic interiors.

Margot La Rouge plays out like a steamy, claustrophobic bedroom play. It takes place in the ladies’ bar of the night where Margot plies her trade. With the orchestra – vigorously led by Francesco Cilluffo – surging past the box-like salon, and the apron largely unoccupied, this led to the odd balance problem. But an oppressive sense of confinement suits this story of poor deceived and trapped women. A lost peasant, Margot (Anne Sophie Duprels, who will return in The Villa) is under the sway of pimp Totor (David Woloszko) and his controlling lover The Artist (Paul Carey Jones). She experiences a transformative glimpse of past, and possibly future, happiness when her old flame, Sergeant Thibault (Samuel Sakker) and his company of squads seek shelter from the (rather orchestrated) storm. . Before long, rekindled passion, jealousy and machismo prepare a climax that leaves two stabbed corpses on the ground.

From the languorous sensuality of the Prelude, with its painful wind melodies on the beat and the swell of the strings, the score of Delius aspires to the happiness of the village where Margot and Thibault first loved each other. This lush pastoralism pierces the hard, rain-soaked pavements of Paris: a sign, perhaps, of Delius’ artistic distance from his appalling material. He never finds out how to bridge that gap. 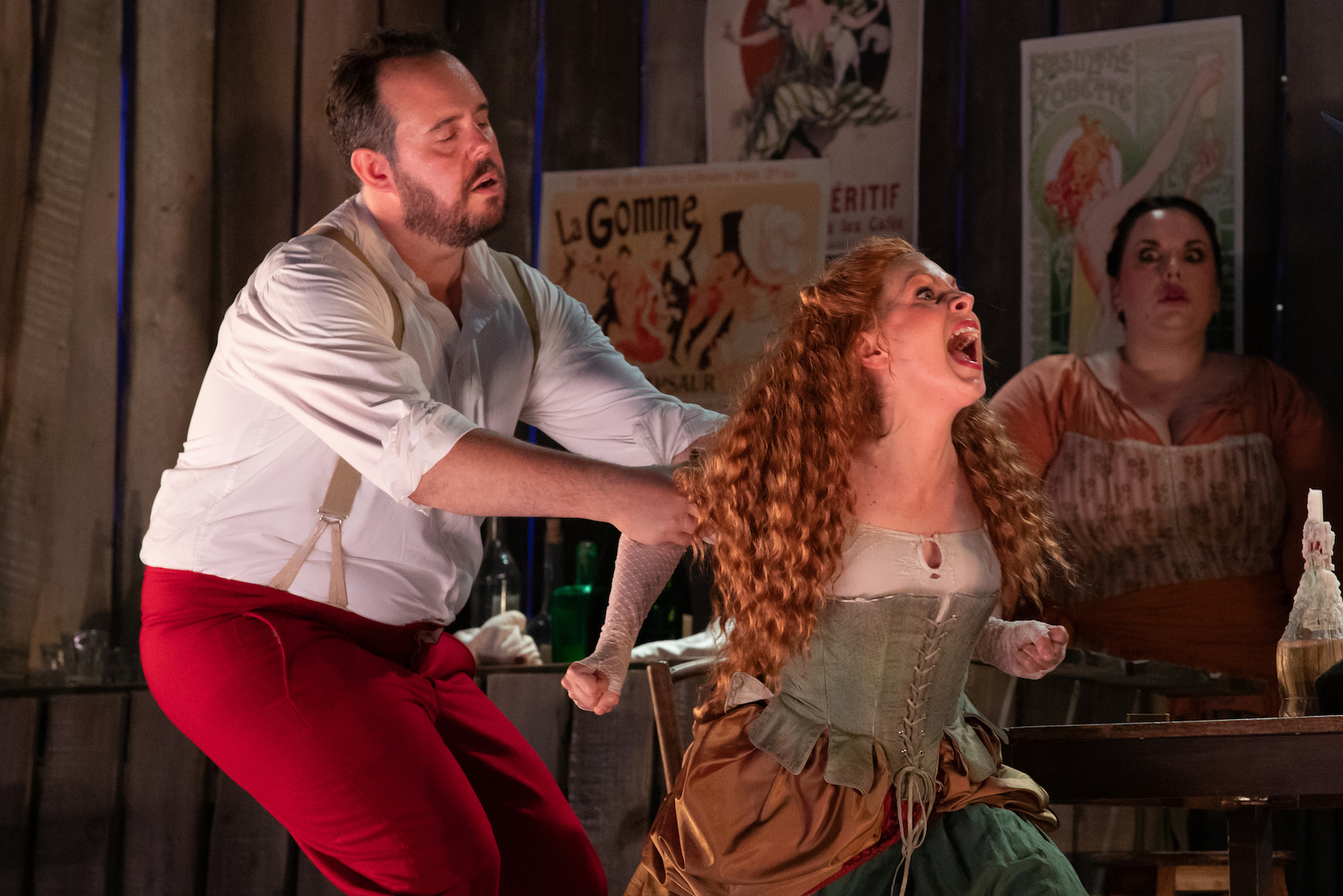 Meanwhile, Duprels makes a warm-hued, graceful but steely Margot. His pivotal duo with Sakker (picture above), which throbs with thwarted tenderness beneath his uniform, showcases Delius’ capacity for vocal and orchestral splendor as the pair dream of their lost romance. In a thin, menacing voice, Carey Jones’ stunning but sinister Artist breaks the romantic spell – but the gore showdown inevitably undoes pathos with bathos. In this tale of uprooted peasants adrift in the cruel city, the music itself – sumptuously shaped by the Sinfonia – seems alienated from the blood and thunder action it conveys.

In The Villa, by contrast, the promising Puccini wholeheartedly buys an ultra-Gothic idiom. With its ballet sequences danced by the titular spirits of betrayed maidens (think Adam Giselebased on the same legend), its haunted forests and ancient curses, the mood and mode of the opera goes back beyond the mid-century Grand Opera to Weber Der Freischütz, rather than heading for the realistic, everyday scenes in the world of Rodolfo and Mimi. Yet the all-too-real vulnerability of single women in a society that cages them binds these disparate pieces together. The Villa begins with the same tableau of a robbery from home that we see at the start of Margot La Rouge.

In fact, the show bounces more like a succession of striking sets than a series of consecutive events. The forester’s daughter Anna (Duprels again, if there is anything more touching here than in the Delius) sees her beloved Roberto (Peter Auty) set off for Mainz to collect a mysterious fortune. There, a seductive mermaid will season her (as they do). Anna will die of grief, and upon Roberto’s repentant return, the vengeful ghosts will – in every way – give him the jitters. The terminal dance is not often featured as a cause of death in modern life, but it certainly is in European folklore. No snickering from the back: much of the music is terrific, sculpted by Cilluffo with panache and finesse. Opera Holland Park’s enthralling, disciplined cast and chorus convey an engagement that suspends (most) silliness.

Like the old forester Gugliemo, Stephen Gadd (picture above) has poise, dignity and an ingrained authority that lends credibility to his paternal concern. The Verdian music of Puccini during the village choir of farewell to Roberto relocates us resolutely to Italy. It adorns a veritable show-stopper of a scene, later reflected in Anna’s funeral. Duprels packs Anna’s tunes in apprehension and, later, desperation with a tender, winding yearning and grief that eagerly awaits Puccini’s mature blockbusters. Auty, meanwhile, swaggers then suffers with a grandeur of tone and a fervor of expression that seem almost greater than the part itself. Factor in atmospheric ballet scenes (complete with final Dance of Death), expertly choreographed by Jami Reid-Quarrell, and the lavish fun of the individual parts offsets the irregularity of the whole work.

The translator of the supertitles – Paul Hastie – also deserves a shout out: spiritually up to date in Margot (“no freebies”, pies warn squaddies) and properly hi-falutin’ when the doomy romance of The Villa requires it. “May every dream of love be free from disillusionment,” implores Gugliemo. The two halves of the Holland Park double ticket violently puncture this ball. But there’s a lot of joy – even fun – coming down as lovers and traitors fail.