The Excursions of Mr Brouček, the review of Grange Park Opera [STAR:2]

It all started so well.

The opening bars of the opera “problem” by Leoš Janáček, Mr Broucek’s Excursions, were rapturously performed by the BBC Concert Orchestra under the direction of George Jackson, creating the sing-song, shifting and throbbing world of sound, by turns romantic and heroic, that only Janáček’s musical imagination could create. Everything was alive, everything was possible.

Then, unfortunately, the curtains parted.

Broucek was a problem opera even for Janáček, who spent 12 years writing it. It is the story of Monsieur Brouček, a Philistine and bourgeois landlord who, in a drunken stupor, imagines an excursion to the Moon (which he discovers, to his horror, inhabited by avant-garde artists) and a second excursion that takes him back to 1420, when Prague was embroiled in a patriotic rebellion against the Holy Roman Empire.

The opera alternates Brouček’s rather sordid daily life on earth with the world of his fantasies, just as Janáček does in his later masterpiece, The cunning little vixenwhich alternates the forest of animals with the sad life of the people of the village.

In the opening scene, designer Leslie Travers fills the stage with gigantic kitschy tourist memorabilia on which hangs a huge shattered souvenir plate from Prague. It’s a striking image, and the board is a masterpiece of scenic construction, but we were already in a world of fantasy, rather than everyday life, and this lack of contrast makes the first half in particular quite boring.

Janáček’s targets for satire are quite low, aesthetes on the Moon being so rarefied that they don’t eat; they simply smell the flowers and burst into tears when Brouček is found eating a sausage. Director David Poutney responds by throwing the kitchen sink (and, in one scene, a toilet) onto the scene, most of it with questionable taste.

A modern sculpture is unveiled in the Temple des Arts to reveal an enormous sausage skewered by a fork on which dolly-birds, dressed in hot pants and knee pads by Marie-Jean Lecca, are encouraged to writhe.

A “solemn procession” (to quote the libretto) is transformed into a parody of a pride march, led by drag queens and same-sex couples. It was especially hard to watch on the same weekend that a gunman in Oslo murdered two people in a gay bar the day before their pride parade. Poutney uses his own translation of the text and completely rewrites the lines when it suits him. On one occasion, he introduces a “joke” about rape, which should be cut. 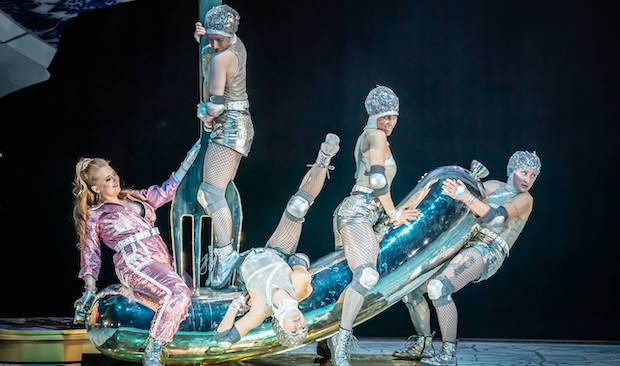 A sculpture in the Temple of the Arts. Photo: Marc Brenner

The second act, thankfully, is like a different opera with a different director, and contains exciting choruses. All the credit goes to choral director Philip White and the heroes of the whole season, the 24 young choristers who sang their third opera in four days. This act contains almost the only moment of the whole evening when the too frantic rhythm stops for a moment, soprano Fflur Wyn singing a lovely lament for a father killed in battle.

Tenor Peter Hoare does an outstanding job as Brouček, playing him as a friendlier rogue than he should be, his warm tenor matching all the demands of the role. Mark Le Brocq, in a tenor part generously sprinkled with top Cs, is heroic as Mazal, Brouček’s irresponsible tenant who keeps reappearing in his dreamlike fantasies, as troublesome people usually do.

A special mention for Robin Horgan as a performance artist on the Moon who pours paint on himself and manages to keep his cool, despite the indignities asked of him, and for those wonderful character singers , veterans of hundreds of productions, Andrew Shore, Clive Bayley and Adrian Thompson, playing multiple roles with the enthusiasm and energy of college fresh outs.

Jackson and the BBC Concert Orchestra give the musical performance of the GPO season. But the opera problem definitely remains a problem.

Mr Broucek’s Excursions are sung in Czech with English surtitles. Other performances are June 29 and July 7