The right choice of compositions – The Hindu

As part of its tenth annual music festival, Sri Kartikeya Gana Sabha featured singer Duddu Radhika on the third day. His fluidity in the interpretations, his technical finesse, his careful pronunciation and his vocal clarity have found a meeting ground. Upholding her classical instincts, Radhika made no wrong choices in selecting her compositions. Publish a quintessence
Mahaganapathim and a series of numbers, the singer found her marks with Thyagaraja
Evarimaata Vinnavo in Kambhoji ragam, preceded by an elaborate ragalapana which fits perfectly into the composition. The complexity of his nerve to
Parama bhakta paradhinudanuchu added a rich texture to vocals. Dikshitar’s Quick Dial
Sarasijanabha Sodari in Naagagandhari ragam with all its spiritual plot set the tone for his Ragam-Tanam-Pallavi in ​​Abhogi ragam. A shimmering tanam leading to its pallavi
Easwari Jagadiswari Parameswari Devi Mamadhura Meenakshi Satatamu Brovave and afterwards a fascinating tani avartanam (by the accompanists B Janardhan, P Jayabhaskar, R Dinakar) inaugurated a unique dynamism in the ragam.

Living up to expectations 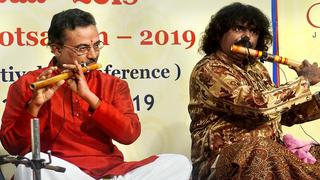 The most anticipated concert of the musical series, a jugalbandi between flautists Praveen Godkhindi and MK Pranesh, lived up to the hype as the instrumental troupe captured an alluring blend of Hindustani and Carnatic styles. The Abhogi varnam, in both classical forms, gave an insight into the versatility of the performers. The delineation of the Pantuvarali ragam by MK Pranesh leading to Thyagaraja
Sambho Mahadeva was as rewarding as the melodic-rich exploration of Pravin’s raag Jog in the next issue.

In their departure from the classical space, the instrumentalists came together for a composition in Kadanakutuhala ragam woven by Anoor Anantha Krishna Sharma, where the rhythmic pads clearly gave the zing to the frenzied orchestration. Keeravani’s RTP ragam was a unique example of tabla, mridangam, rhythm pads and morsing providing instrumental support to the flautist duo, resulting in an immersive musical experience. They also paid homage to their roots with some Kannada compositions
Krishna Nee Begane Baro and
Bhagyada Lakshmi Baramma . The semi-classical stay was indeed worth it also for the finesse of Anoor Anantha Krishna Sharma on the mridangam.

Bengaluru-based Carnatic singer Aishwarya Vidya Raghunath on the final day of the concert series displayed musical mastery, an adaptive voice and a firm shruti. However, that was the priority of technical finesse over soul. The gripping ragalapana and swarakalpana were among his main assets. However, for a concert series that sounded in a lot of promise for a major part, it wasn’t quite the finish we expected.